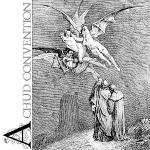 “Exstrophy of Amphigouris” will finally be officially released by the french label hERMETIQUE. Release dates are still unknown but it’s beginning of 2005. The release will be under dvd-size jewel box with hyper-esthetic printed cards included and limited edition t-shirt. The label is also planning the re-release of the previous n.3.3. records including “Rebearth”, but there is also a competing project of “Circle Records Anthology” including all the circle products on the german label Ironflame. At the moment we still don’t know which one, or both, will take place.

The Berlin major label Ironflame has expressed the desire to re-release a CD-version of all the Circle Records albums, with extra tracks. Contacts have been taken with Play it Again Sam’s archivist Tchéri Vandedeur, to recover the master tapes. Tapes were found, and project is in preparation.

The album “Rebearth”, originally released as à;GRUMH…’s second album, in the ambient style, is now re-released by Circle Records as a CD under the title “Rebearth” by nEGAPADRES.3.3. and is now available thru our shop.

S3 started to work on a home page for à;GRUMH…, nEGAPADRES.3.3. and the Circle Records and TTKK products. Archives were digged, and the first draft of the home page was put online at the end of the year. Many reactions from fans and old and new friends started to flood by email. J3 got online right at that time, saving S3 lots of work in replying that mail. 🙂